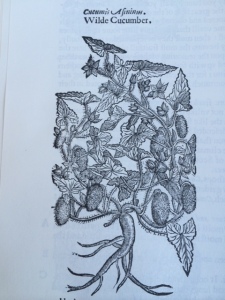 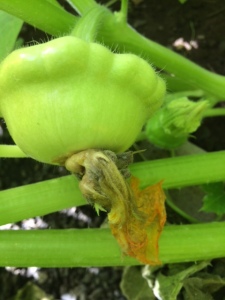 This year I grew some very old heirloom vegetables.  The first picture above is a photo of my plants of ‘Jamaican Burr Gherkin’ a cucumber from Jamaica, originally from West Africa.  The seed company I purchased the seed from gave a date of the 1500s. The fruits are small, spiny, with a mild, slightly tangy flavor and began ripening in about 70 days.  This variety is excellent for pickling.    A plant with similar, spiny fruit is depicted in a woodcut illustration in Gerard’s The Herball published in 1596 in London, as ‘Wilde Cucumber’.  The leaves in his illustration, however, are not deeply cut and lobed as they are in ‘Jamaican Burr Gherkin’, but have a slightly jagged edge.  They are more similar to what Gerard shows as ‘Citrull Cucumbers’.  The citrull cucumbers are early yellow cucumbers with watermelon-like leaves, just as those of ‘Jamaican Burr Gherkin’.

The third illustration is my photo of ‘White Scallop’ summer squash.  This squash is excellent baked or fried and has flat fruit with scalloped edges.  It is known to be a Native American variety.  Gerard provides a nice illustration of what is probably the very same plant.  He calls it ‘The great Buckler Pompion’ (fourth illustration).  The growth of the plant is very large, maturing early.  It continues to bloom and set fruit for a long period.

The fifth illustration is my photo of ‘Long Pie Pumpkin’ known since at least 1832 in New England.  It the garden it spreads quite a distance, has large, deeply cut leaves and seems to continue to bloom and set fruit a long time.  This variety can be picked while still green and will ripen in storage.  It is rather rare today.  Gerard shows a somewhat similar variety in a woodcut labeled ‘The Great Long Pompion’.  In his description, he says the meat next to the rind is white, and the interior spongy and slimy.  He mentions that the fruit ripens green or gray, while our variety ripens orange.

It is important to preserve these ancient heirloom vegetables that are so rare today.  They are all open-pollinated, so seed can be saved for next season.  If you do save seed, be sure to research about seed cleaning, saving and storage and check the isolation distance required to prevent cross-pollination with other varieties, which would dilute the genes of the variety you re trying to preserve.