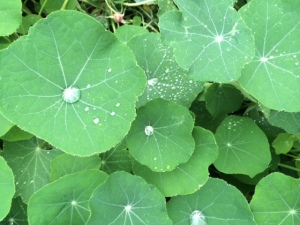 Nasturtiums have been grown in gardens for centuries in Europe and America.  The first species known in Europe was collected from Peru.  It was grown by Gerard and is illustrated in his Herball dated 1596; modern botanists call it Tropaeolum minus.  He named the species Nasturtum indicum and his illustration showed a plant wound about a stake.  The plants he grew had yellow flowers.  He mentions that some people of his time thought nasturtiums to be a form of bindweed, which means they had a somewhat vining habit.  Gerard writes “…one plant doth occupie a great circuit of ground, as doth the great Bindeweede.”   In Gerard’s time nasturtiums were considered a warm season vegetable, with the virtues of the various kinds of cress.  In most literature on nasturtiums, T. minus is described as growing only 12 inches to 18 inches high and across, while T. majus is said to reach six feet wide.

Tropaeolum majus arrived in England sometime in the 1600s.  It was likely to have been used for its flowers rather than as a vegetable.  T. majus grows into a larger plant than T. minus and has a distinctly vining habit.  Hybrids with the two above species and T. lobbianum extended the color range and variety available over the centuries.  Once there were several dwarf  “Tom Thumb” varieties, but they seem to have disappeared.  The oldest varietal seed strain I could find is ‘Empress of India’ dating to 1889.

This year I grew a rare surviving seed strain of nasturtiums from the 1890s named ‘Phoenix’.  Its flowers are illustrated in the first photo above. This strain produces a mix of bloom colors in beautiful warm shades splashed with darker colors as in T. minus.  The flowers have beautiful serrated edges.  The catalog I purchased seeds from listed ‘Phoenix’ as an example of T. minus, but I believe it to be a hybrid between species, for its plants are very large.  This heirloom variety is open-pollinated.  In third photo above I show newly planted ‘Phoenix’ nasturtiums, as a border on the left square bed.  In the fourth photo I show how large the plants are now, October 25th.  Some runners from the plants reached six or seven feet.

I recommend trying ‘Phoenix’ nasturtiums and also suggest you save seeds, for the variety is very rare.  Also, be sure to give the plants a lot of room; perhaps three to four feet in all directions.  Hanging baskets made with these and antique blue Lobelia erinus ‘Crystal Palace’ from 1867, might be quite beautiful.