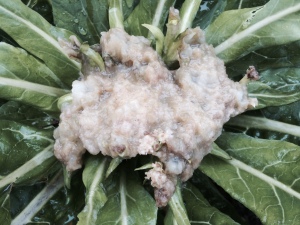 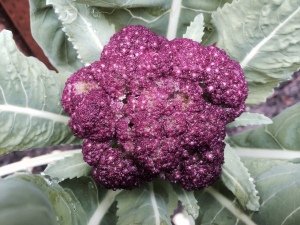 I grew two varieties of heirloom (open-pollinated) cauliflower in 2015.  The top picture shows a period illustration of ‘Henderson’s Early Snowball’ from Peter Henderson’s Garden and Farm Topics of 1884.  Peter Henderson was a market gardener farming in New Jersey during the mid-nineteenth century.  He created this variety for production in the American climate.  ‘Henderson’s Early Snowball’ was earlier to mature than any other variety at the time and a bit smaller, weighing about one pound.  Other varieties Henderson grew and recommended in 1867 are: ‘Early Erfurt’, ‘Early Paris’, ‘Half Early’ and ‘Wellington’.  By 1884 he added ‘Algiers’, ‘London Market’ and his own ‘Early Snowball’.  All varieties except the latter originated in Europe, which has a much more even climate than most of North America, so his introduction was better adapted to the wide swings of temperature in the U.S.  In 2015 I was unable to locate seed of any of the old European varieties, but this year seed of ‘Erfurter’ is being offered by Baker Seeds.  Since its maturity is listed at 55 days, it may be ‘Early Erfurt’, which dates to 1867 or earlier.  ‘Early Snowball’ matures in about 55 days from transplanting also.  It was introduced to the public in 1888 and Henderson commented that it took less growing space in the field, was more tolerant of temperature variations and was his most profitable cauliflower crop.

The second picture depicts ”Purple of Sicily’.   I have not been able to discover the date of introduction of this variety, but it reached the U.S around 1912.  It is purple in color while growing, but turns bright green when cooked.  Similar to broccoli in many respects, it is softer and more tender, like a cauliflower.  This variety is later maturing (90 days) than ‘Early Snowball’, but is more tolerant of high and low temperatures and is more insect resistant.  The heads are larger, about two to three pounds each.  I had great success with this variety it tastes as good as ‘Early Snowball’.

The third and fourth pictures above show heads of each variety after a frost of 19 degrees F.  I was surprised that ‘Purple of Sicily’ was still fine and edible after such a low temperature; while any other cauliflower would have most likely been destroyed, as was ‘Early Snowball’.

Cauliflower enjoys mild, cool temperatures.  Too high of temperatures or too dry conditions will cause it to “button”, which means the heads will only grow as large as a quarter instead of reaching full size.  In the nineteenth century gardeners grew crops of cauliflower in cold frames, timing an out of season harvest for late fall, winter and early spring.  The frames needed to be covered with mats for the night to insulate them from extreme cold.  An important consideration was to harden off the plants well before planting outside in cold conditions.  These nineteenth century methods used no fossil fuels so left a very low “carbon footprint”, an important fact in today’s warming climate.  Their methods can be undertaken today; what is required is careful timing and management.

For late spring crops, start seeds indoors in February.  When the plants have 6 to 8 leaves, transplant out into cold frames.  Plants put into frames in March can be transplanted into the open garden in April.  Hardening the plants in frames makes them able to withstand cool spring temperatures.  The plants should be ready to harvest in June, before it gets too hot.  You can direct seed in April also, for plants to mature in late June.  For fall crops, seed can be sown July through mid August, transplanted out in 5 weeks, to mature in September to October.  Adjust these timings to your climate; these recommendations are for the northwest U.S.  In climates with cool summer temperatures cauliflower can be grown well in summertime, too.  Cauliflower is not as frost hardy as cabbage or Brussels sprouts; both of those crops were still usable here after the 19 degrees night.

I will definitely grow both of these heirloom cauliflowers this year and I will try ‘Erfurter’.  I love cauliflower and feel it is worth the extra trouble to grow.  When you grow your own organically, as I do, you know it will taste great and you will reduce your carbon footprint by not purchasing vegetables shipped long distances.  Also, you are not unknowingly eating a GMO products, which we know have yet to be labeled as such.  The Baker Seeds website is http://www.rareseeds.com