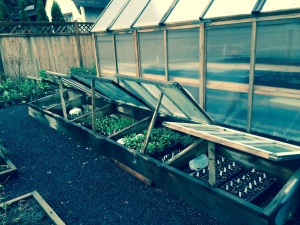 We have to face the fact that here in much of the Northwest we have a short frost-free growing season.  Those living at higher elevations have an even shorter growing period.  Most gardeners in the area look for ways to extend the vegetable growing season: everyone wants to have ripe eggplants, tomatoes, squash, melons, etc. before the season ends and frosts return.  A great help for gardeners is to purchase or construct covers, or cloches, to protect our plants early and late.  In the nineteenth century, glass bell-shaped cloches were used, as well as cold frames glazed with glass.

Today, one popular and inexpensive alternative cover is a polyethelyne tunnel, a series of metal hoops over which plastic is stretched.  The spring vegetable season can be started up to four weeks earlier with tunnels.  The same is true of fall, when it is possible to have crops ready up to six weeks later, because the soil will be warmer in fall and hold its heat longer if cloched.  Tunnels are quite useful for heat-loving crops in our frequently cool summers; cantaloupe, watermelons, squash, tomatoes, eggplant, and cucumbers are some examples.  Floating row covers will also protect plants at night from colder temperatures.  The heaviest will protect plants from frost up to seven or eight degrees of frost.

Plastic jugs, with the caps taken off and bottoms cut out, work well for small plants planted out before late frosts occur.  Covers can be placed before nightfall and removed during the day.  Gluttonous and ubiquitous cutworms will be discouraged from chewing by the subterranean sharp edges of the jugs; this is important because these creatures feed at night.  Large metal cans and paper milk jugs are other inexpensive cloches.

Cold frames are excellent cloches or protectors of young plants.  The soil inside them stays much warmer at night than the outside air.  If mats or fabric floating row covers are used to cover plants they will protect crops to lower temperatures than uncovered plastic tunnels or jugs.  I constructed my own cold frames, though they can be purchased from many sources at a considerable price!  An important factor with cold frames is to open them in the morning as soon as temperatures permit and close them before it gets too cold, in late afternoon or early evening.

Paper, glass, water-filled plastic covers or wax coated cloches are other quick solutions to save plants if a late frost is expected.  In Montana, in a mountain valley at an altitude of 3,000 feet I have used cloches to save bleeding hearts, primroses, lilies and early spring flowers from sudden freezes that would have set them back considerably.

Have a great spring!

One thought on “Cloches and Cold Frames”