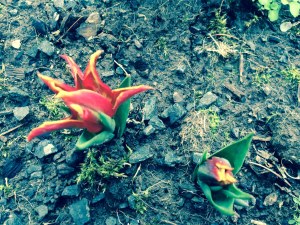 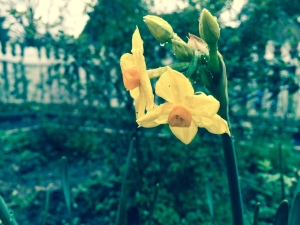 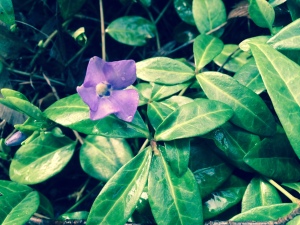 I have several more wonderful heirloom flowers blooming here in Oregon in late February.  Tulipa schrenkii is shown in the first photograph.  It was introduced into Europe in 1608 from Turkey and is rare today.  The rather pointed petals are a warm red, margined with golden orange.  John Parkinson described and illustrated this tulip (though botanists have changed its name) in his great work A Garden of Pleasant Flowers, published in 1629.  He calls it “Tulipa pracox rubra oris luteia.  The early red tulipa with yellow edges, or the Duke.”  This species was an ancestor to the ‘Duc van Tol’ tulips, which were developed to be forced into bloom and sold, during the seventeenth and eighteenth centuries.  Tulipa schrenkii is hardy in USDA zones 3-9.

Tulips are fairly easy to grow.  they prefer sandy or light soil, full sun, and a dry summer.  If you live in an area with rainfall in summer, you can dig them and store them in in netted bags or open boxes until October, then plant them again.  The bulbs will increase under such treatment.  I cover my bulbs with poultry netting to discourage cats from scratching the bed and squirrels from digging the bulbs.

The beautiful. fragrant Narcissus orientalis known in the nursery trade as ‘Grand Soleil d’Or’ is illustrated I’m the second picture above.  This plant is illustrated in Parkinson as well, labeled ‘Narcissus Africanus aureus major.’  He compares it in size to the beautiful ‘Primrose Peerless’, and mentions that it is of “…exceeding sweet a sent”  (I have used the modern “s” instead of the antique “f” used in 1629).  Parkinson also mentions the “blackish brown coate or skinne” covering the bulbs.  This narcissus is forced in great quantities today and has a delicious scent.  Out of doors, it is hardy in USDA zones 8-10 and needs a dry summer as well, being native to northern Africa and Asia Minor.  I have grown this variety inside the house; in the low desert in California, and now here in Oregon (in the warmest, sunniest spot available).  It is beautiful and indispensable in my garden.

The third photograph depicts Vinca minor or periwinkle, just beginning to bloom here.  It has been grown since Roman times and Pliny refers to it as Pervinca.  Chaucer used the spelling “Pervinke”.  The plant is a vining groundcover with evergreen leaves and lovely blue flowers.  Periwinkle loves part shade and a moderate amount of water.  A white form exists, as  well as a double blue and a plum-colored single.  Vinca minor is hardy in USDA zones 4-10.

An important feature of these three plants is that they can be grown with moderate water, an important factor in the increasingly dry climate of the U.S.